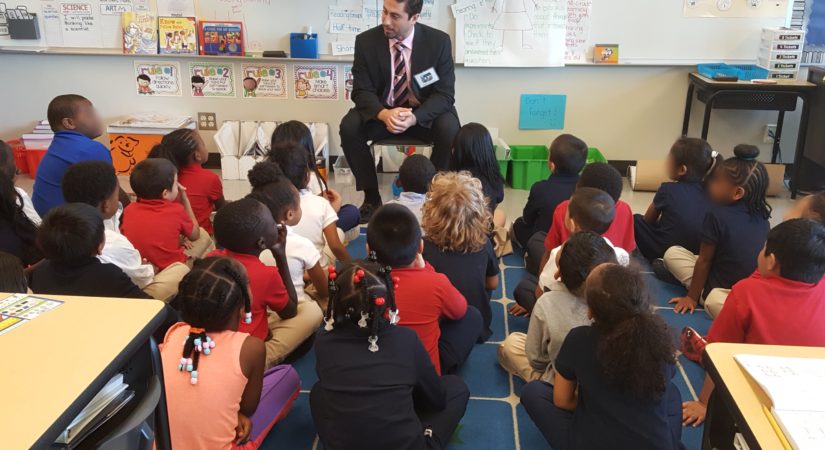 The attorneys at Sheed Law Offices recognize the importance of being involved with and cherish the opportunity to give back to the community. This last Friday, September 16, 2016, was Constitution Day. Constitution Day (or Citizenship Day) is observed in the United States and celebrates the adoption of the U.S. Constitution and those who have become United States citizens. It is generally observed on September 17, the day in 1787 that delegates to the Constitutional Convention signed the document itself in Philadelphia.

On Monday, September 19, 2016, attorney Danny Sheed of Sheed Law Offices was invited to speak with first and second grade classes at Rainier View Elementary in the Rainier Valley neighborhood (http://rainierviewes.seattleschools.org/) of the City of Seattle about the Constitution. The goal was to tie the interaction with the students into lessons taught to them about the Constitution.

Danny spoke with a second grade class taught by teacher Bridgett Baldwin, as well as first grade classes taught by Patricia Lozano and Grace Fennimore. Keeping in mind the ages of those students with which he spoke and the goals of the school, Danny sought to relate the Constitution to important classroom and school rules, as well as laws of the community. The Rainier View Elementary School’s website states that the school’s overall goal is to “[E]nsure that all students experience JOY while learning in a safe and inclusive environment that fosters the whole child while accomplishing results.”

Providing a brief history of the Constitution, Danny spoke to the students about the important reasons why the document was necessary for the newly born United States, as well as the level of agreement that needed to be reached by those people who would be governed by it before the document became law.

“For a lot of the same reasons as you students are told not to run in the halls, to raise your hand before speaking, and to listen to and follow the directions that your teachers give you, the Constitution was also created: to keep you safe, to allow you the opportunity to learn, and generally, the opportunity to lead happy lives,” attorney Danny Sheed told the students.

Danny then answered questions asked by the students before they began some collaborative projects where they worked together to create some class rules that would support them in their collective goal to learn in a safe and happy environment.

The attorneys at Sheed Law Offices, PLLC, thank Rainier View Elementary School, its students, teachers, and administration for the opportunity to participate in the school’s Constitution Day lessons and look forward to the opportunity to be able to speak with the children again in the future.